It wouldn’t be a Royal Palace without a few hidden-yet-astonishing stories… we’ve dug them up. 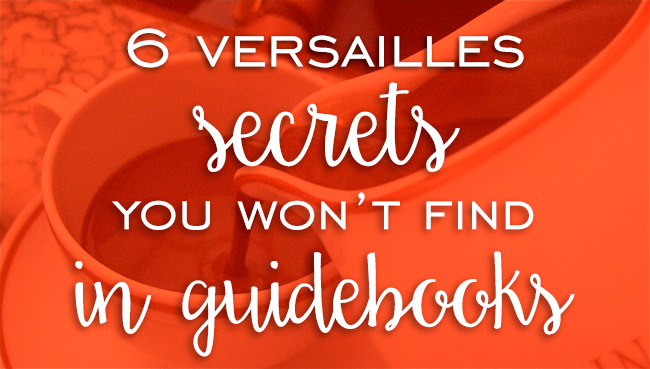 After centuries of royal habitation, you just know that Versailles has baggage. The history of the place is relatively well known – it started as a pretty frumpy hunting lodge. When Louis XIV, the awe-inspiring Sun King took power, he made the big changes that turned the Palace and grounds into what we can see today.

But in between all those well-known talking points are some really interesting little gems. Like…

Hot chocolate was the drink of choice

If you imagine the royal court back at Versailles in the 1600s, you probably imagine lots of fancy food feasts and wine and champagne. But actually, hot chocolate – a delicacy back then – was one of the favorite drinks of King Louis XV. And what the king did, everyone did. 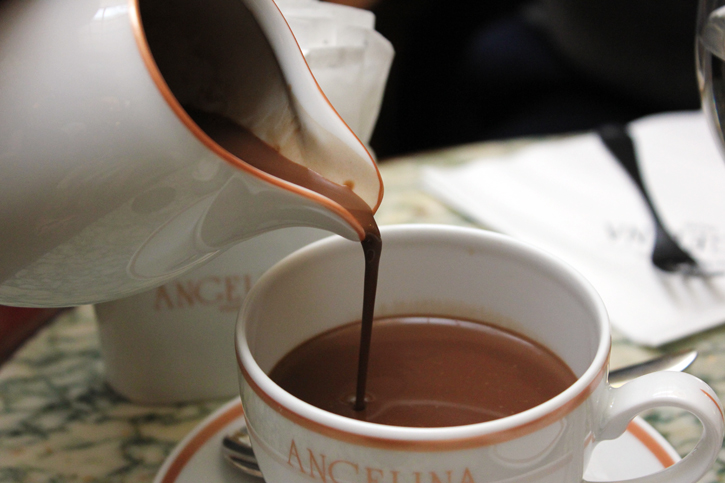 Louis XV’s mistresses were also big fans of the drink. It was an ‘exotic’ drink, and there was also a lot of talk at the time of chocolate’s aphrodisiac effects.

Sometimes, Louis would even *GASP* make his hot chocolate himself, in his Private Apartments! A king doing something as common as making a drink… well, he had to have really wanted it right then and there. 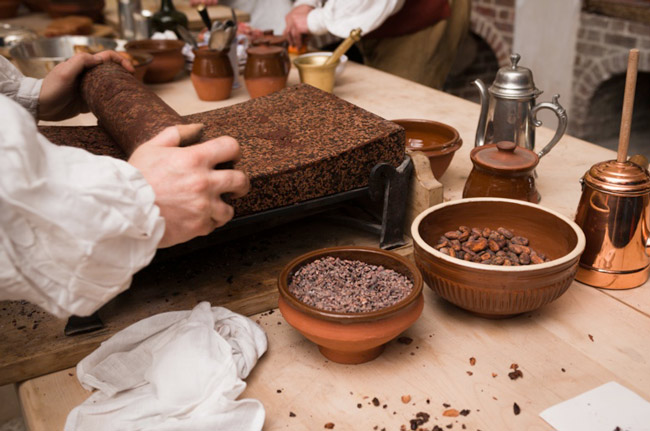 Place an equal number of bars of chocolate and cups of water in a coffee pot and boil on a low heat for a short while; when you are ready to serve, add one egg yolk for every four cups of liquid and stir over low heat without allowing to boil. It is better if prepared a day in advance. Those who drink it every day should leave a small amount as flavoring for those who prepare it the next day…

Angelina (famous for their hot chocolate) inside the Petit Trianon. Could there be a more perfect place to get a cup of real hot chocolate?

Versailles was a dirty, stinky mess

It’s easy to picture Louis XIV and Marie-Antoinette living in the Versailles we know today… perfectly manicured, gold-tipped everything, and… no worries about stepping in feces as you wander the Palace.

Yes, you read that right. 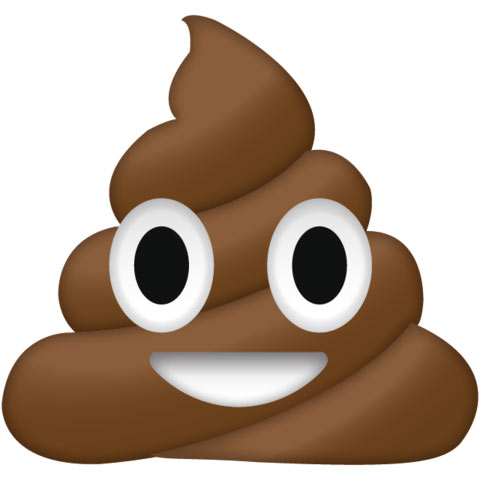 Of course there weren’t toilets as we know them in Louis XIV’s Versailles. There were some rather fancy looking chamber pots…

But they were chamber pots all the same. They were a hassle to empty… so normally, maids would just empty them right out the window. Imagine your fancy carriage arriving to the Palace of Versailles, your beautiful new gown or silk suit shining in the sunlight, and oh, look, there’s a nasty pile and splattering right next to the building. Yikes.

It’s said some 10,000 people could be housed at Versailles at one time. You’d be sorely (stinkily) mistaken to assume there were enough toilets (and toilet cleaners) for everyone. Chamber pots overflowed and seeped into walls and through floors and ceilings. These awful conditions encouraged people to just… go wherever. Hallways and galleries became public restrooms, to an extent. 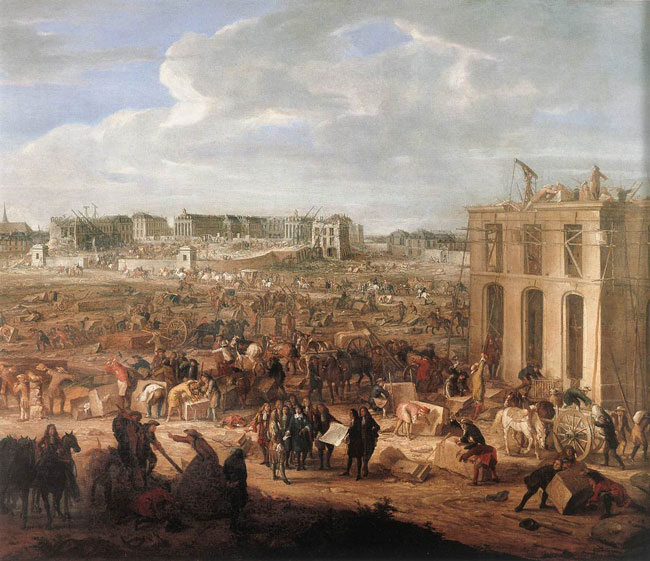 You also have to remember that Versailles was under construction for most of Louis XIV’s reign. Dust was everywhere, all the time. The grounds weren’t verdant and grass-covered – they were mounds of dirt and building materials. Versailles was honestly a construction site for about 40 years, and for nearly the entire time the Royal Court was housed there.

A violent storm took down 10,000 trees at Versailles

Overnight from 25-26 December 1999, two violent windstorms swept through Europe. Gusts of wind as intense as 210km/hr (130mph) pummeled Versailles over about 2 hours in the dead of night.

When the sun rose on 26 December, Versailles looked quite different than the day before. 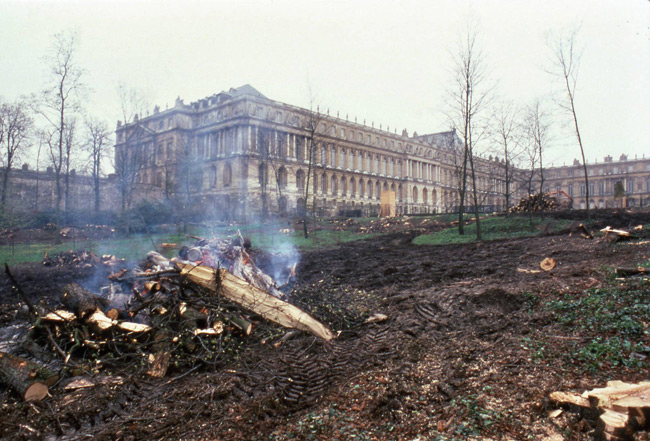 Palace windows were shattered, several roofs had flown off to find new homes, and worst of all was the gardens. More than 10,000 trees had been uprooted or split. Every path and avenue was affected – a few were even completely inaccessible.

80% of the gardens rare species collection were damaged… including the tulip trees planted in 1793 by Marie-Antoinette, and the Corsican pine planted by Napoleon.

Though the destruction was massive, it actually turned out to be a good thing. Historically, the trees in the grounds would be replaced on a regular basis, to keep the forests healthy, varied, and young. Many of the 200,000 trees in Versailles were too tall, or weakened by age and disease. However, there hadn’t been any of that necessary replanting that in centuries. Why? Because no one wanted to “spoil” a historical site!

Over 2 million euros were raised to help with the replanting effort. Over the next years, 50,000 trees were planted in the gardens and grounds. A couple projects were also pushed through at the same time, restoring the garden groves to how they were under Louis XIV. Not bad! The gardens of both Trianons were also restored to their 18th-century state.

Most of the original waterworks are still intact

If you’ve been to Versailles, you’ve seen this view: The Grand Perspective. 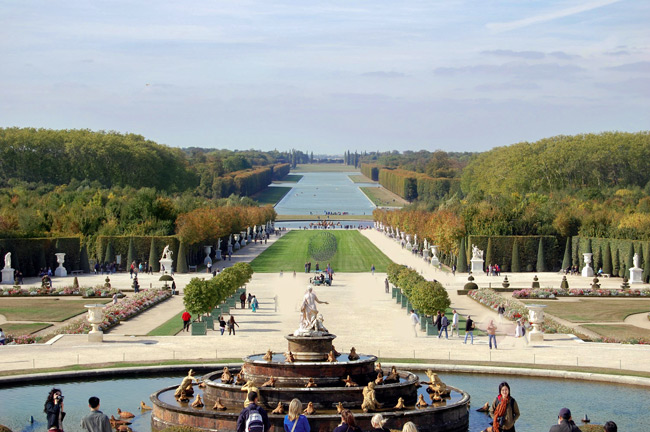 Look at all that water! The fountains (Latone in the foreground, Apollo in the middle of the picture) are some of the most iconic structures in the gardens. And if you’ve wandered through them on a Musical Garden day, you know that water, reflections, and dazzling fountain displays are everywhere.

What you might not know is that most of the original hydraulics for the fountains are still intact.

When Louis XIV begin overseeing plans for the construction of his Palace and Royal Gardens, there really weren’t any fountain specialists in France. Instead, he hired a consultant from Italy to handle the specifics. For example, what diameter pipe is needed to make the fountain 10 feet tall when turned on? And more importantly… where is this water going to come from, and how will it be pumped all throughout the Versailles grounds? 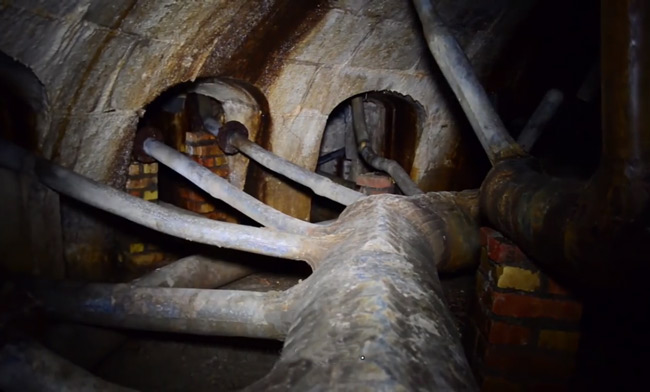 There was a lot to plan, to say the least. A machine called the Marly Machine was built in 1684 to pump water from the Seine river to supply Versailles’ needs. The work was done well, to the height of the Sun King’s standards. There’s definitely something to be said about doing things the right way the first time… because most of the waterworks network is still in place.

Some restoration has been done – often at curved pipe sections, for example. Some small sections have to be replaced since the late 1600s. It doesn’t happen as often as you’d think though, for being hundreds of years old!

There are three libraries (filled with fake books)

Louis XVI had his own library (named after him)… typical king stuff! Louis XVI loved this library, especially for the fact that it was on the same floor as his own apartment. When your pad is that big, I guess you DO have to worry about stuff like that… 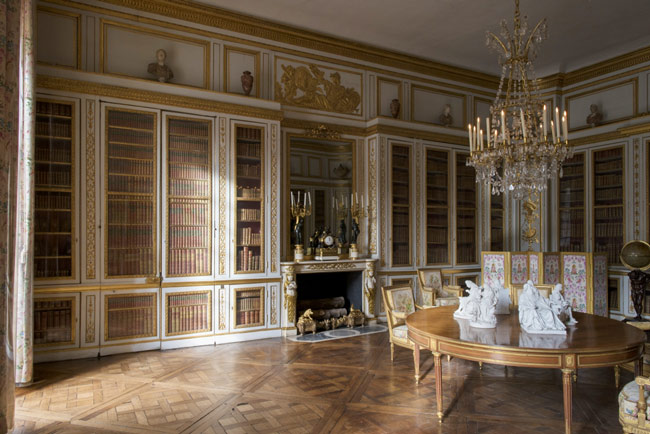 The Queen’s Library, named after Marie-Antoinette, is currently undergoing restoration but should be up and running again by Spring 2018. Before that it had remained nearly exactly as it was when it was given to Marie-Antoinette in 1781. 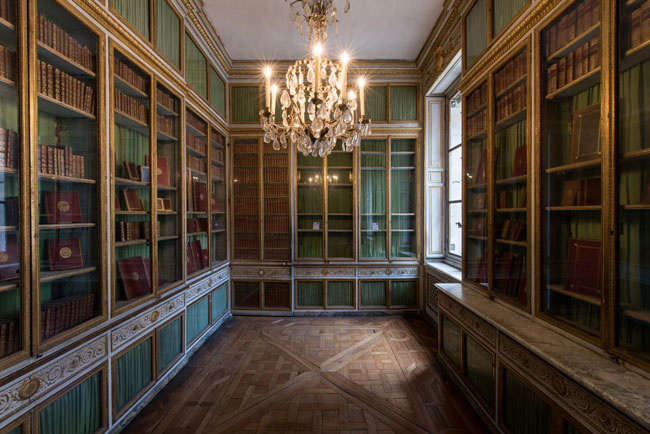 Finally, there’s the Madame Victoire library. Madame Victoire is one of Louis XV’s 8 daughters. Even though she was never married, she was called “Madame” instead of “Mademoiselle” because that’s just what you’re called when you’re the daughter of a king! Though Madame Victoire sadly died of breast cancer in 1799, her final years at Versailles were spent in a super luxurious 6-room lodging in the Palace. Including this beautiful library! 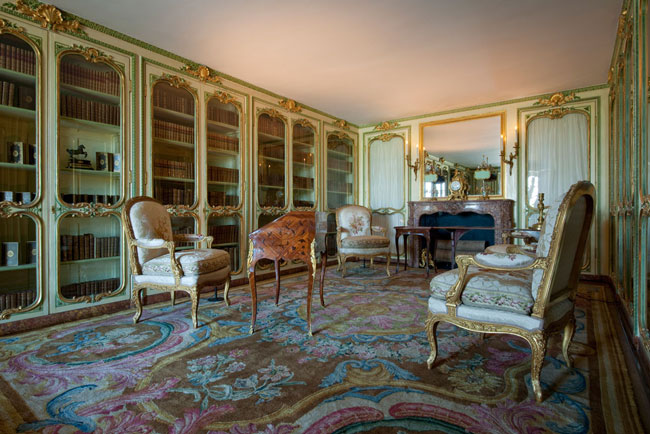 So now you know about these libraries… but the surprising fact here is that they are totally useless. They shelves are not filled with real books. In the 1970s, the manuscripts about the history and functionality of the Chateau were moved to the National Archives in Paris.

All the “books” you see in these libraries are fake.

There’s only one exception, and it’s a big one: Manière de Montrer les jardins de Versailles. It’s instructions on how to visit the gardens of Versailles (which path and order, etc), and incredibly, it is written in Louis XIV’s own hand.

Prostitution was a real problem at Versailles

If you’ve wandered the grounds of Versailles –especially further out than the ornate garden groves – you’ve seen the vast woodlands that surround the Palace.

Well, back in Louis XIV’s time, those woods were the perfect “office” of local prostitutes. And not even just local – the wealth at the king’s Court attracted those from all over! 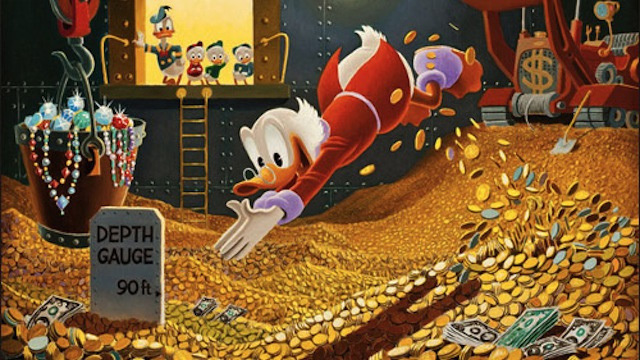 Louis XIV was not a huge fan. It was alright for him to have mistresses, of course, and sexual promiscuity was not new or even necessarily looked down upon. However, he drew the line at prostitution getting in the way of his Palace being built.

Workers were constantly getting diseases and slowing construction, and this was a tipping point for the Sun King.

First, he outlawed prostitution. Well, that didn’t really work; things continued on like before.

So then, Louis XIV decided to go big or go home. He made a law saying that if caught, prostitutes will be whipped in a public place, and their clients will have their nose and ears cut off. 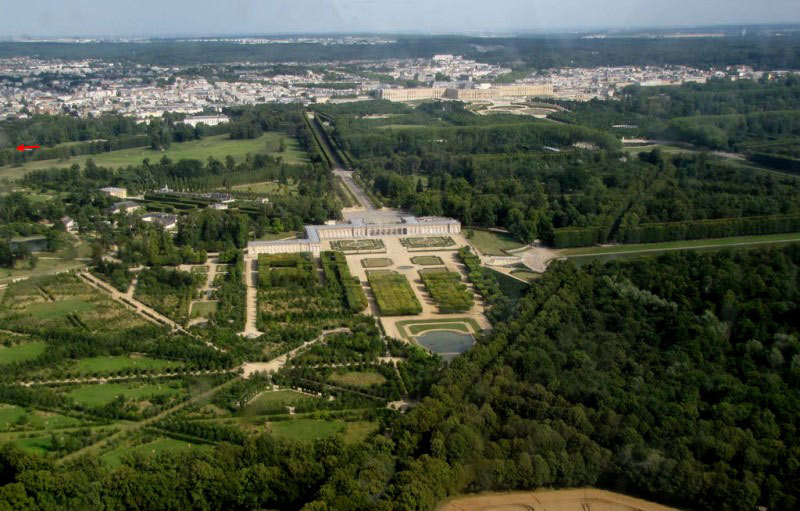 Though difficult to enforce (Versailles is HUGE, and the Swiss Guard patrolling the grounds was too small), the measure did have some effect. Eventually much of the prostitution moved on, to ‘hotels particuliers’ in Versailles and Paris. Those places were marked with a crown of laurels, to indicate to clients the new addresses

If I told you any more of these crazy little tidbits, I’d be giving away the totally amazing tour we do of Versailles, the Trianons, and Marie-Antoinette’s hamlet. So I’m zipping my lips now. But if you want more of this, book that tour… and go ahead, why don’t you give yourself a 10 euro discount on it? Use the promo code SECRETS from now until May 2018 to get the discount.