Ladurée is a global household name, and many travelers are lucky enough to have a Ladurée in their home country. Yes, since its humble beginnings in 1862 as a simple bakery, Ladurée has now become an international brand. You can find shops in London, New York, Sydney, Tokyo, Singapore, Dubai… But let’s not get ahead of ourselves! I’m here to tell you about the main Paris Ladurée on the Avenue des Champs-Elysées, and the top three reasons to visit it. 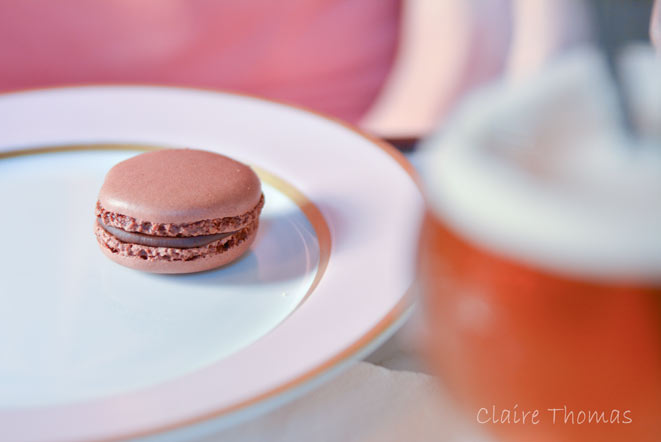 Hey – you might even be persuaded to travel to France JUST for Ladurée, if I do my job right…

A teensy bit of delicious history first: Ladurée was founded as a bakery back in 1862. To give you an idea, of how old Ladurée is, it was founded the same year:

So we’re making money in the states, making milk in France, making magical lands in England and… macarons in Paris! 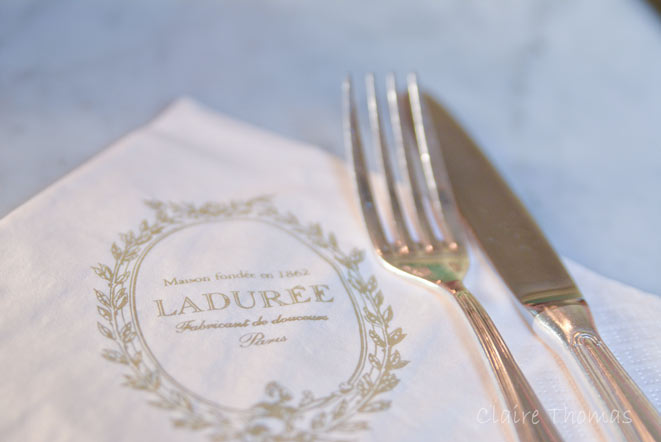 Well, not quite. Louis Ladurée opened a plain old bakery at 16 rue Royal in central Paris. It wasn’t until a fire ten years later that he was prompted to turn it into a patisserie instead. Well you know what they say! When life gives you… flames?

Though the patisserie did well, we don’t get macarons as we know them today until the 20th century when Louis Ladurée’s grandson Pierre Desfontaines ‘invents’ them. 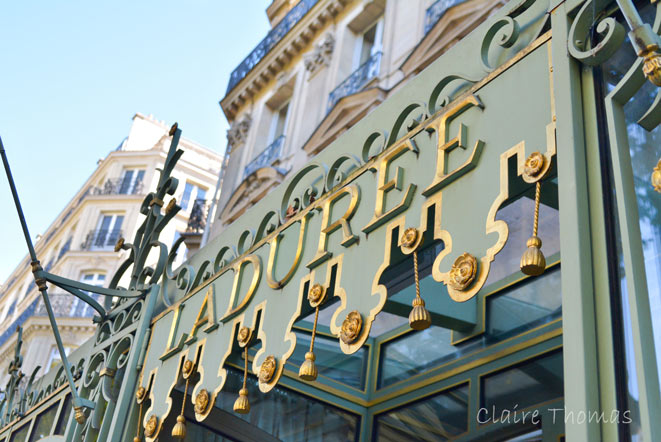 He didn’t really invent macarons; he got the idea from a vacation in Switzerland. But still, Ladurée definitely made them à la mode.

Later Jeanne Souchard (the daughter-in-law of Louis Ladurée) came up with the idea to open a tea salon above the patisserie – reportedly one of the first in Paris – where people could enjoy their pastries right after buying them. 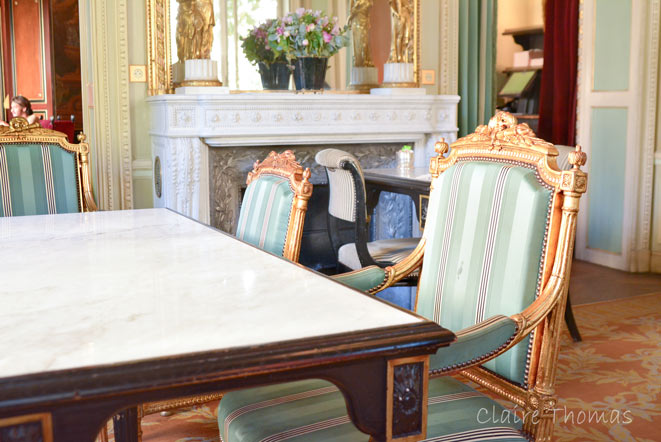 And we’ve now come to our transition to the Champs-Elysées Ladurée. This is an example of someone taking an idea (Desfontaines’ tea salon) and multiplying it by a thousand, and adding gold.

So, why do you want to visit? Three reasons: read on!

With some 300,000 visitors every day, the Champs-Elysées is one of the main attractions of Paris and is often called “the most beautiful avenue in the world”. That description surely comes from the days before H&M, McDonald’s, and Abercrombie & Fitch moved in… but, still. 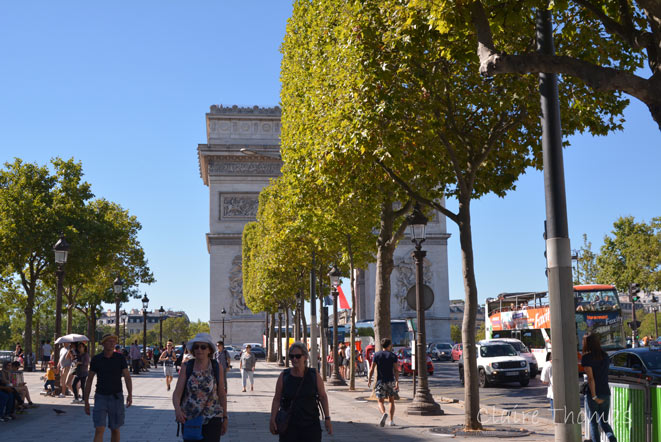 You have the Arc de Triomphe on one end, Place de la Concorde on the other end, and there’s so much to see in between – even if you don’t like shopping.

For example, take a peek inside the Petit Palais or the Grand Palais for some culture.

Climb the Arc de Triomphe for a great view (day or night), or just visit the Tomb of the Unknown Soldier and admire the architecture from the ground. 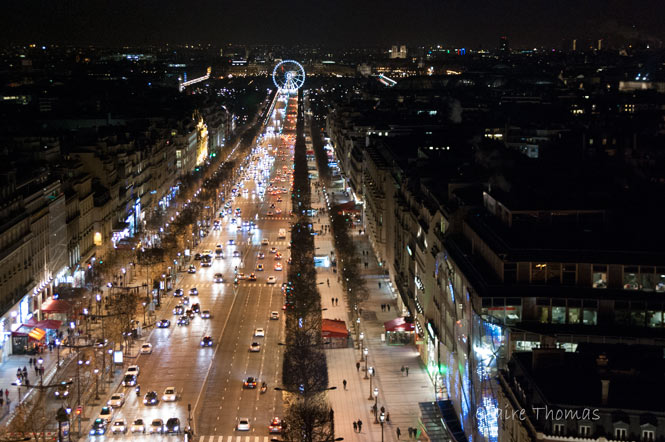 You can also catch a movie right on the avenue. That’s definitely something to consider during hot summer months since air conditioning in Paris is quite rare! Don’t forget to take in the beautiful Place de la Concorde, or even go on the Ferris Wheel set up there.

Behind all that you have the lovely Tuileries gardens and the Louvre.

Suffice it to say: this is an important part of the city, and Ladurée’s location on the Avenue makes it perfect for a day of sight-seeing. 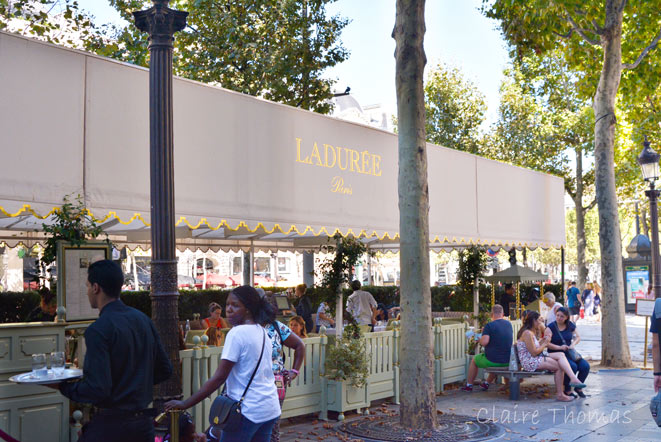 Of course I also think it’s a destination in itself… but that’s just me.

Don’t forget that the first Sunday of every month, the Avenue des Champs-Elysées is car-free. It’s a great opportunity to j-walk on one of the most famous streets in the world, without worrying about getting hit by a car!

Ladurée shops are generally well decorated in the recognizable soft sea-foam green, gold, and other pastel colors. You definitely get a feeling of luxury walking into their shops. Even the Ladurée stand at the CDG airport exudes a certain class and charm: 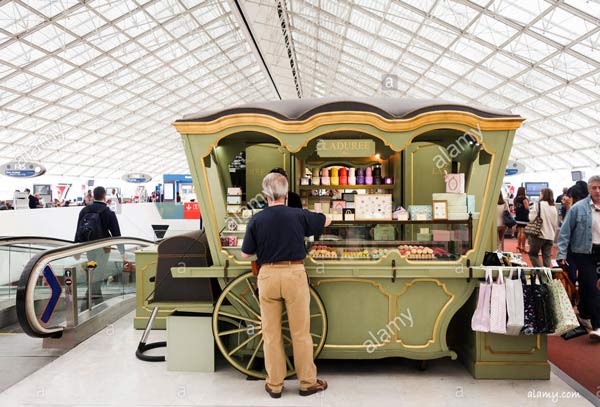 But at the flagship Ladurée on the Champs-Elysées, it’s really on another level. 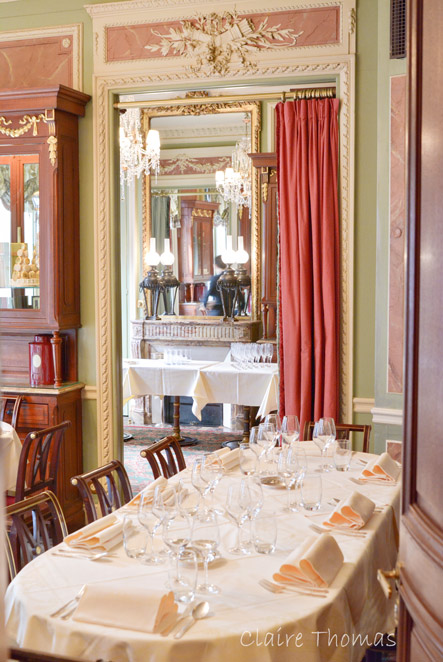 Sumptuous chairs detailed in gold, marble-topped tables, thick satiny curtains that have an air of Marie-Antoinette… wow, just wow. I really think this is one of the most luxurious moments you can have in Paris.

The prices are reasonable, too, especially when you take into account the ambiance you are soaking in (more on that later). 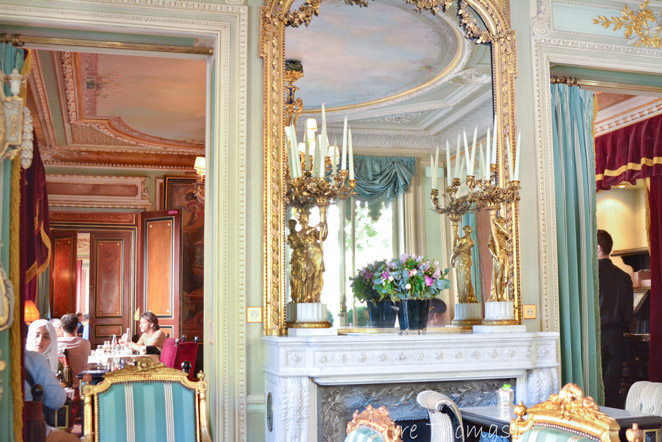 The service here is friendly – it can still be a bit slow but this is France after all! Last time I was here I saw one server patiently explain almost the entire menu to a group of tourists. I don’t know if even I would have been able to do that and still have a smile on my face after…

It’s really the perfect pause in your day, whether you’re in a shopping frenzy, museum-ed out, or just need a nice sugar fix.

I almost want to let the pictures speak for themselves, but as lovely as they are, you simply have to try these pastries to really understand! 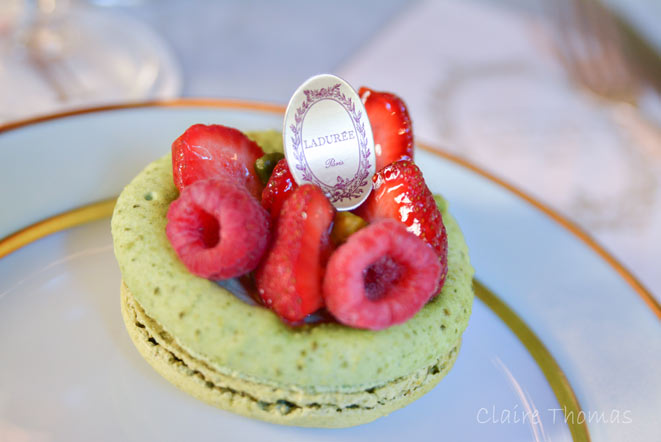 I’ve had plenty of Ladurée macarons in my day so I welcomed some different pastries, such as the praline millefeuille, which was delightful. Tip: turn this pastry on its side to slice bite-sized pieces without smashing all the cream out. 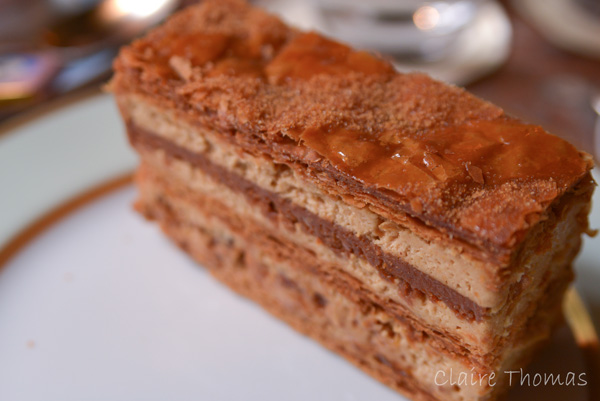 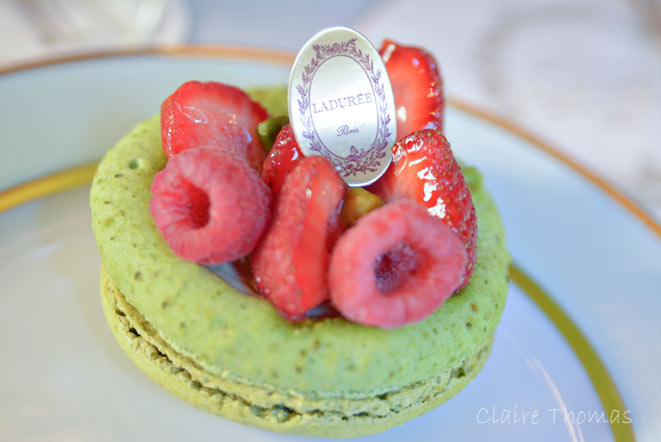 …and the pistachio Religieuse. What? There were too many delicious options, we couldn’t only get one… 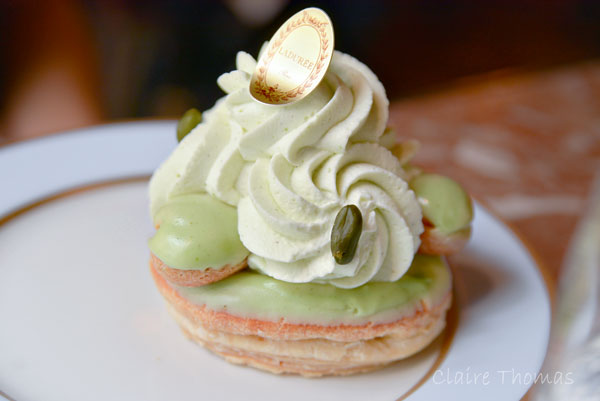 We also ordered the plate of 4 macarons; you select the flavors you want. Three ‘standard’ macarons (salted butter caramel, vanilla, chocolate) and one seasonal (peach). 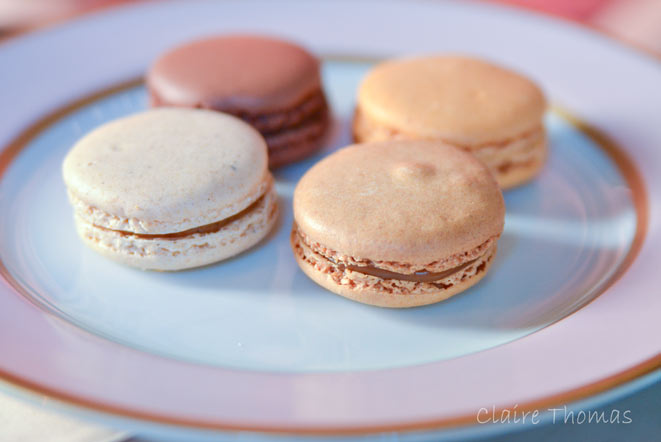 Along with that I got a very welcome iced tea, and a carafe of water with extra ice cubes. Oh those ice cubes were a lifesaver – it was 37 degrees C!

The harmonie dessert was magnificent – pistachio-based macaron and pastry cream, topped with fresh raspberries and strawberries as well as little chunks of pistachio. 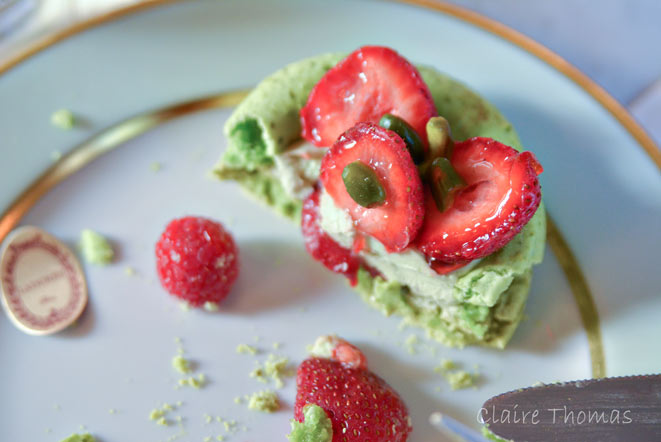 We were (as usual) blown away by the macarons. Every single one was a treat, though I was very slightly disappointed in the peach. To be fair, I’m not a huge fan of peaches, so don’t judge the macaron too harshly. 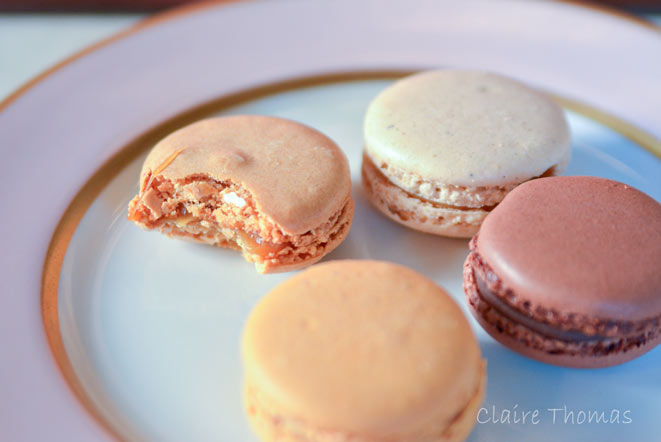 I think eating in this atmosphere is perfect because it makes you eat slowly and really savor every bite. It’s easy to get distracted by the beauty all around you. That makes the moment last longer.

For 2 desserts (Harmonie and plate of macarons) and the iced tea, the bill was 27 euros. Those prices are actually not hugely marked up from what you would buy at the shop. And like I said, for the ambiance it is a great deal. 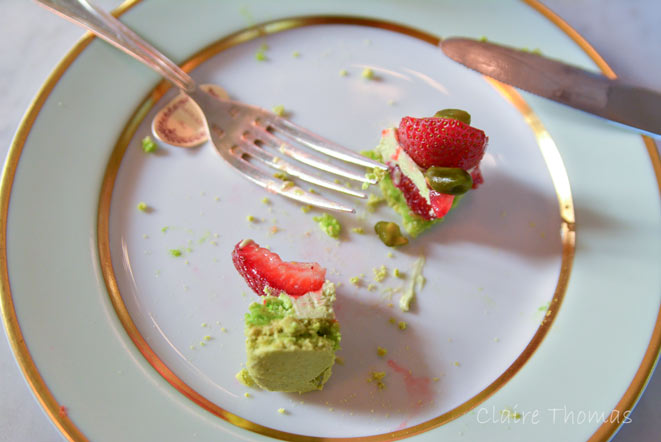 If you can’t make it to the Champs-Elysées shop…

Ladurée has more than 85 shops over 5 continents(find nearest store), and employs some 1700 people every day to bring you your macarons from the kitchen to your hands.

What a lucky job… think they get to eat the cracked or broken ones? I bet so… *pauses, reconsiders career path*