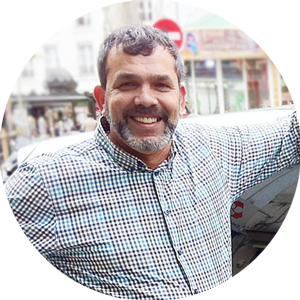 Rachid is an important part of the Sight Seeker’s Delight team! He is an official Parisian chauffeur, so he makes sure that you get through the winding Parisian streets unscathed during the Private Paris Whirlwind tour. Originally from Morocco, he has lived in Paris for more than 15 years and before coming to Paris, he lived in Boston. His English is impeccable and you can expect to meet him with a big smile on his face!

When Karen moved to Paris 15 years ago, Rachid was one of the first people she met. For over a decade they have remained close friends and when they saw the opportunity to work together, they jumped at the chance. You can get to know Rachid and his Prius during your Private Paris Whirlwind tour, and maybe along the way hear some fun stories about Karen.