A friend of mine recently had his brand-spanking new iPhone stolen on the Paris metro. His loss (as well as my own pretty unsavory experience with phone theft) prompted me to write a guide for anyone using smartphones in Paris, though especially for iPhone users since those are the phones most likely to be targeted for theft. 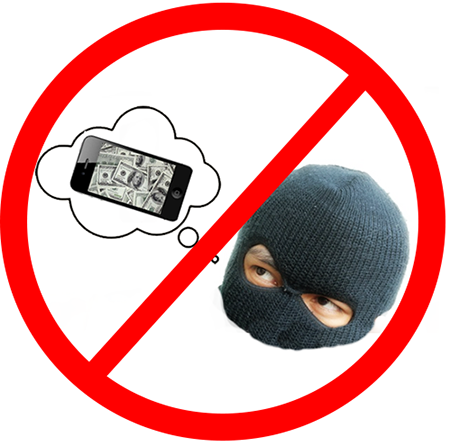 This guide is NOT to scare you, and it’s definitely not just for tourists – if you’re a Paris resident you need to pay attention, too. Obvious tourists may be marked as ‘easy targets’ by scammers and pickpockets, but anyone can be a victim to these thefts and scams.

However, as an international traveler getting your phone, wallet, or passport stolen is a really serious thing, and could throw a serious kink in your perfectly-planned Paris vacation. So I’m here to help, with some honest advice! 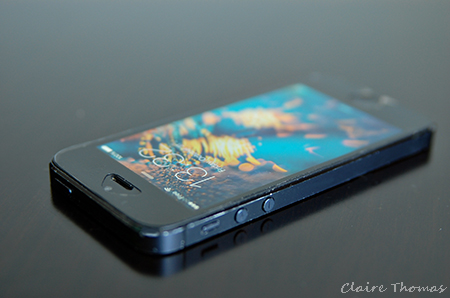 The goal of this Paris Phone Theft Tactics and How to Avoid Them guide is to make you aware of what has happened to others, so that you can learn from (and avoid) their mistakes. In general it boils down to what you’ll notice is my repeated mantra: Be Aware of Your Surroundings.

But I’m getting ahead of myself… Let’s go through these 7 tactics, one by one.

THE SITUATION
Some kids come up to you with clipboards, claiming they work for X or Y charity. While your kind-hearted self generously listen, sign their petition, or take out your wallet for one of them, there’s another behind you reaching into your pocket for your iPhone.

HOW TO AVOID IT
Official charity collects in Paris do happen, but mostly they are only done by well-known agencies (Unicef, Aides, WWF etc), and the volunteer collectors will have uniforms on for their organization, whether it be t-shirts or jackets. Anyone else coming up to you claiming to be collecting for charity is probably not actually doing that. Instead chances are, they are looking to scam you in some way (scammers are often in touristy places too, like the Eiffel Tower, Moulin Rouge, Sacre Coeur, etc.). Just knowing this should help you avoid this scam.

THE SITUATION
Similar to the charity scam, this one again takes advantage of your good Samaritan-ism. A couple children or adolescents come up to your table with a map, asking you in broken English how to get to somewhere in Paris. They distract you with the map, covering the table with it, and at the same time they swipe your iPhone which you’ve placed next to your napkin.

HOW TO AVOID IT
A good rule of thumb is to simply never leave your phone out in the open, even if it’s close to you… would you leave 700 euros in cash just sitting on the table like that? I’m going to assume that the answer to that is a resounding “NO”! 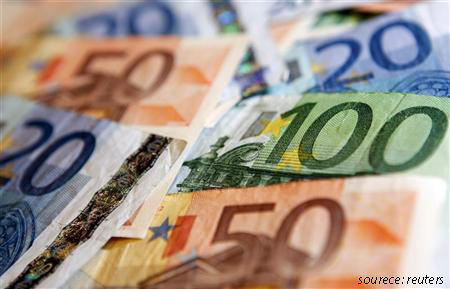 If you’re not using your phone, put it back in your pocket/purse. Or at least have your hand around it… especially since outdoor seating is so common in Paris. Don’t fall into this easily avoidable trap. 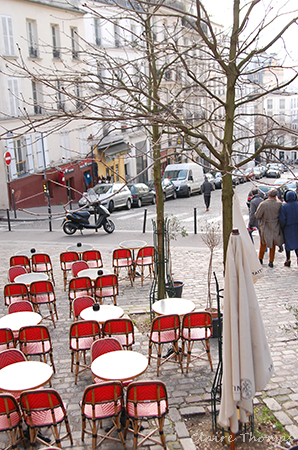 THE SITUATION
BEEEEEEEEEP, the metro door closing alarm sounds. Next to the door, you’re checking the metro map on your phone when suddenly – just a split second before the door closes – a hand reaches in, snatches your phone out of your grip, and you’re left powerless as the doors slam shut and the metro rolls along to the next station.

HOW TO AVOID IT
It may be tempting to think that you’re in the metro car, closed in and worry-free– everyone else is just riding to their destination like you are, right? In rare cases… wrong. 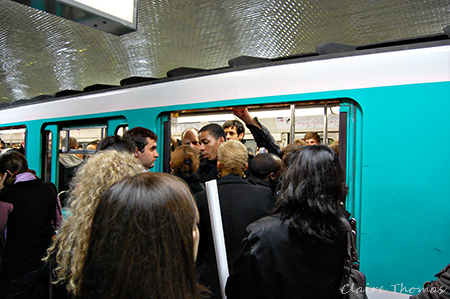 Thieves will casually watch commuters waiting until they see a likely target: someone with an expensive phone who isn’t paying attention to what’s going on around them, and who plants themselves close to the metro doors while staring at their iPhone screen.

Avoid this by choosing seats away from the doors (even if you’re getting off at the next stop) or by very simply keeping your phone safely away until the doors close.

THE SITUATION
The lesser-seen sister of the metro closing-door snatch… You’re on the Paris metro and phew, a bunch of people just got off the crowded car. A group of adolescent girls walk through the door and crowd around you – they just start taking things from your purse, your pocket, your iPhone stolen right out of your hand… Before you have the time to react, they’ve run out of the metro car and BEEEEEEP those doors slam shut and the metro rides along without your belongings.

Note: This theft may be much more subtle- in a packed Paris metro car, as always you must make the effort to be aware of what’s going on around.

HOW TO AVOID IT
Simply keep your belongings secure – zippered purses, front pockets, money belts, etc. And honestly, it’s always important to make sure your iPhone and everything else is safely tucked away while those metro doors are open! Once they’ve closed, go ahead and relax… but just for a couple minutes because when you get to the next stop and those doors open again, put those valuables away again.

THE SITUATION
You’re underneath the Eiffel Tower, gazing up at the Iron Lady in all her iron glory when suddenly you bump into someone. ‘Oops, sorry’ you say to… another tourist? A grumpy Parisian? You don’t even take notice, which makes it hard to later describe the person who lifted your iPhone right out of your pocket. 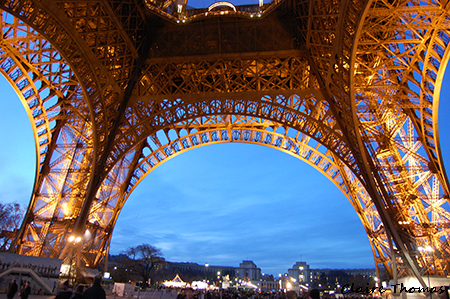 HOW TO AVOID IT
Paris is a crowded city, so let’s face it: you WILL come in physical contact with strangers. On the metro, at a museum, walking the sidewalk, in a café… the list goes on. You can’t make ‘avoid accidental bumps’ the highest priority on your Paris vacation To Do List. 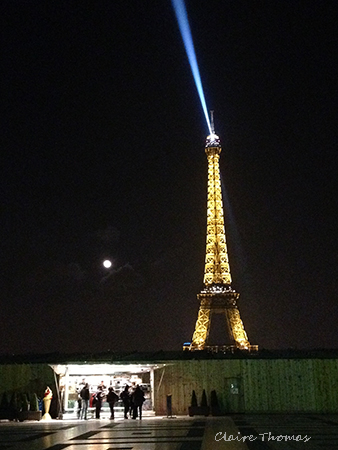 Because we all know this is really your highest priority, and it should be!

However, keep tabs on your iPhone and other valuables when you’re walking in crowded places (big metro stops, tourist destinations, busy events). If your iPhone is in your pocket, get your hand in there too to keep it company! If it’s in your purse, make sure you can see your purse (have it in front of your body) and that it’s properly zipped (ladies, I don’t recommend open or magnet-closure purses in such a big city – unless you are VERY aware of your surroundings!)

THE SITUATION
You enter the metro station and feel around in your pocket…you know you had ONE last unused metro ticket. You pull it out, slide it into the turnstile, and push through. At the same time you feel something strange by your right hip… you turn around only to see a thief removing your iPhone from your pocket. But you’ve already passed the turnstile, you have to run all the way around to the metro exit doors! You’ll never catch them in time…

HOW TO AVOID IT
Tight pants. I’m only partially kidding – skinny jeans are apparently pickpocketer kryptonite. But besides that (and you’re probably sick of hearing me say it by now): keep tabs on that iPhone! Zippered pocket or purse (purse in front of your body, not behind), or hand around your phone in a loose pocket.

This is another case where the thief will have spotted you using your iPhone before you even entered the metro, and simply followed you in. 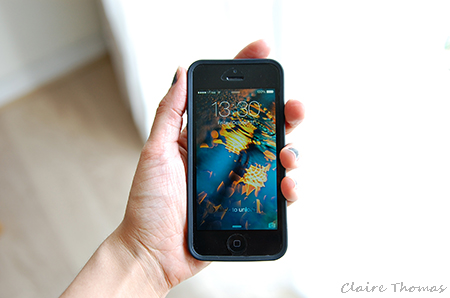 THE SITUATION
You’re speaking with your Parisian friend on the phone about how to get from the Champs-Elysées where you’re currently strolling, to their place in the Latin Quarter. Suddenly, a hand rips your iPhone right out of your hand, and the thief takes off. They’re fast, too. 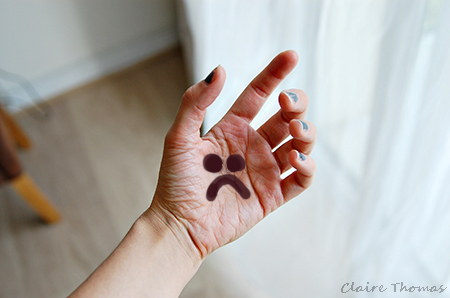 HOW TO AVOID IT
This isn’t very common (it’s pretty risky for the thief), but it does happen every once in a blue moon – mostly in very busy places (tourist destinations, metro stations with many exits, busy events) or late at night. (Did you know by the way that most phone loss happens between 9pm and 2am? This does include simple owner forgetfulness, but these are still prime hours for thieves as well. ) 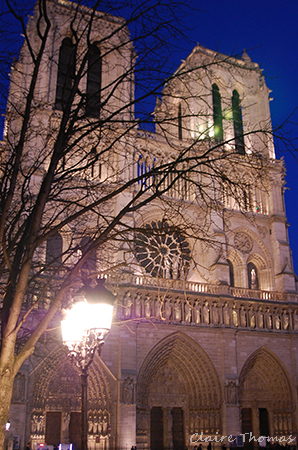 To avoid the grab & run (and many of these other Paris iPhone theft tactics), do your best to plan (your metro ride, your dinner plans, your meet-ups) before you’re out on the street. Even as a seasoned Parisian, I still always do this. It may mean making some calls and searching Google before you leave your hotel, or lunch restaurant, or cocktail bar, that’s all.

Of course sometimes you must make calls, take pictures, or look at your iPhone’s map out in the open… my advice is if possible, pop into a store, café, tabac, or other building. Or, pull over to the side of the sidewalk, with your back against a building so that you can see both left and right, up and down the sidewalk. No one can surprise you that way. Be aware of what’s going on around you! 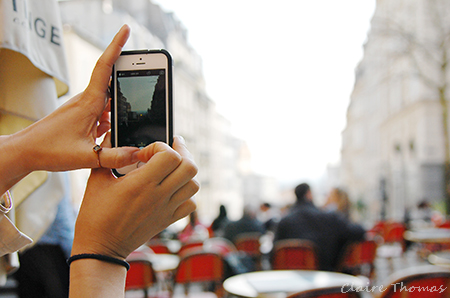 So, should you be scared?

No! There is absolutely no reason to be scared, or to let that fear ruin your vacation, or cancel your trip altogether. You simply need to BE AWARE.

If you have any questions or concerns (or other tips), don’t hesitate to leave a comment or contact us directly!